The Pig From Another Dimension

"Of course we all know about Nostradamus," you explain, "and even more folks are aware of him now that so many best-sellers are out there about the Nostradamus Code and Doomsday Predictions.

Interestingly, many people believe that his powers emanated not from his mind or from supernatural sources, but from a magic Pen that has come down to us from centuries past.

In those days, they didn't have pens as we do today. Pens were made from a variety of feathers...some were pheasant, some were pigeon, or turkey. This happens to be an ostrich plume, which was extremely rare in those days and probably came to Europe from the Far East around the time of Marco Polo.

Strangely enough, the Pen of Nostradamus ended up on eBay, and I was lucky enough to win the online auction," you continue, explaining a few things about the magic pen, which you now display to your audience.

The Pen of Nostradamus then predicts all sorts of things, to the total astonishment of your audience.

Absolutely a stunning variant on predictions, I invented this and use it in my act at every performance, including tv shows.

You will find that it leaves spectators wrapped in mystery and awe.

You get the special plume pen, the incredibly sneaky and wickedly clever gaff, a special pad for your predictions and an instructional and performance DVD from my studio. 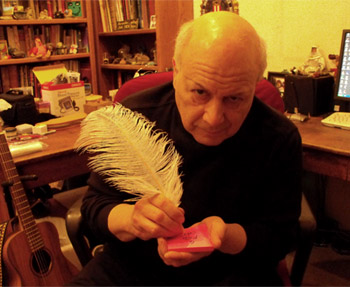